It’s day… I-don’t-know-what of the shelter-in-place order and I hope all of you are surviving… It looks like we’re all gonna be staying home for much longer than expected, which is bad but also great at the same time cause you have more time to browse through my site! I’m just kidding lol, but I do hope that you guys are enjoying some of the content I’ve been putting up here. It looks like I still have a couple more post on Attack, so let’s get right back into it! 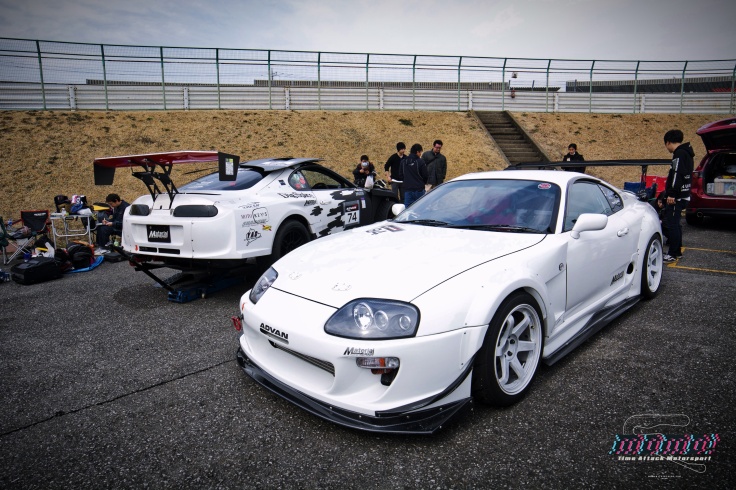 The Material Auto gang had a couple of MKIVs out for Attack, one sporting a full Tamon Design wide body, and the other with an iconic Ridox kit. 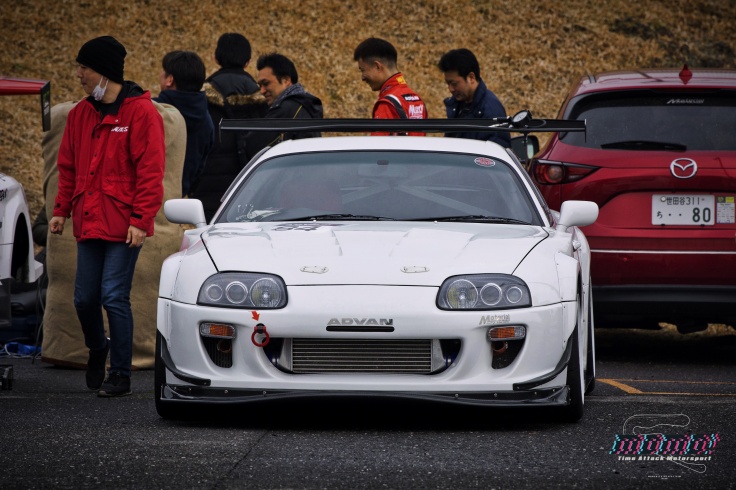 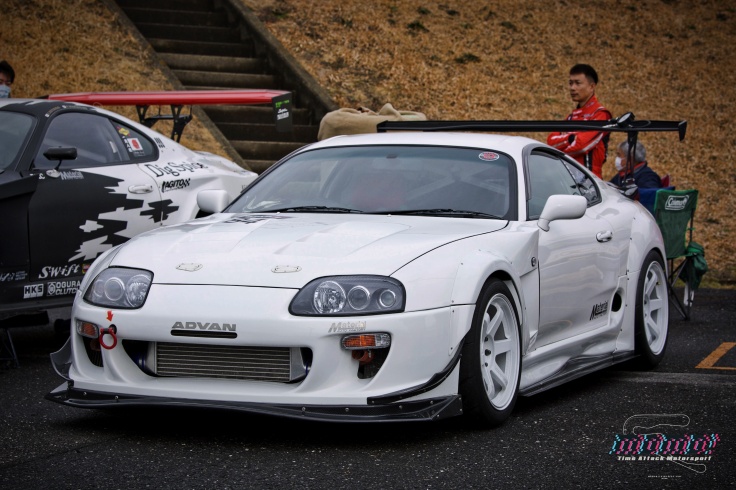 If this doesn’t make you fall in love with the Supra, I don’t know what will… 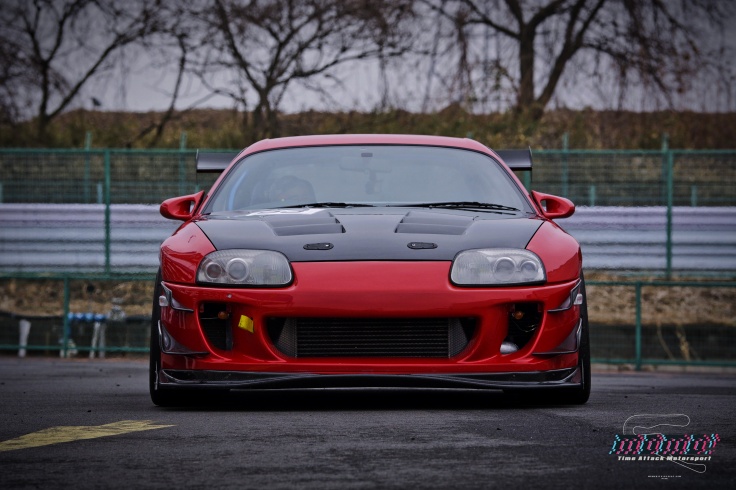 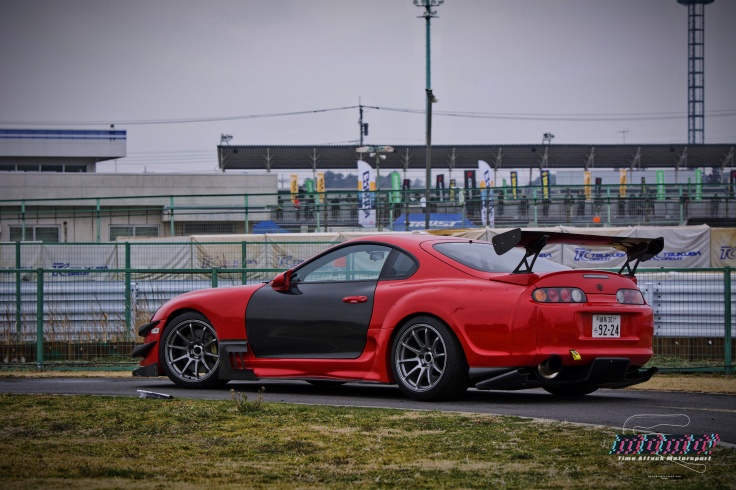 While looking equally fantastic as the Material Auto car, the Kazama Auto Supra turned in a significantly slower lap time than the former, finishing the day off with a 1’03.540.

A car that really commanded the attention of many spectators during the event was the Koshido Racing GNR Mclaren Senna. The 800HP hypercar was not something you’d see often in time attack, so I can see why it was such a treat to see this car out competing. It had a target time in the 56 second range but it fell very short on that objective and finished the day with a 1’00.123 lap time. 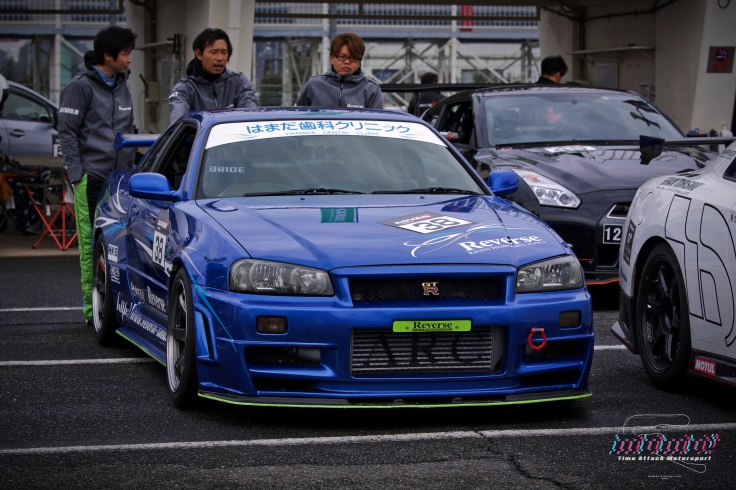 The Reverse BNR34 was aiming to finally hit that sub-minute lap time but fell short this year.

There was a pretty good representation of GTRs from various model years… I do want to see a bit more R34s out though; I feel like they’re a bit under appreciated in time attack. 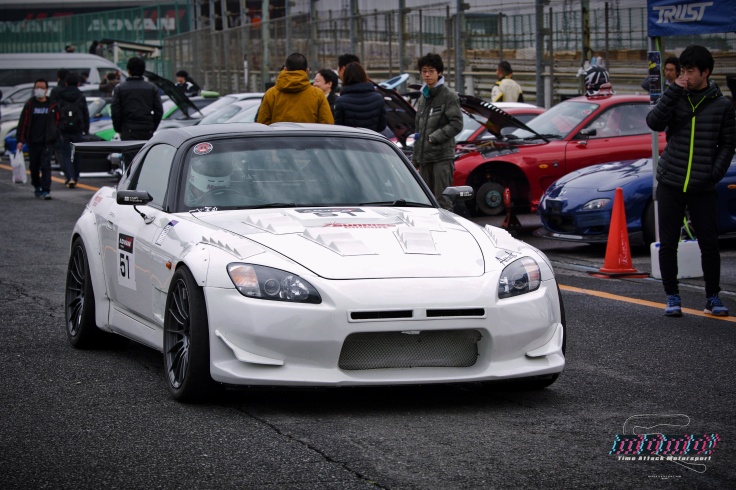 Unfortunately there was no battle of the S2000s this year, but there were still some great examples out and about like the Arvou Sunrise 360 Racing AP1.

I think there were a few BMWs at Attack Tsukuba this year but the best one was probably the TKF MK-Rennsport Technik E92. 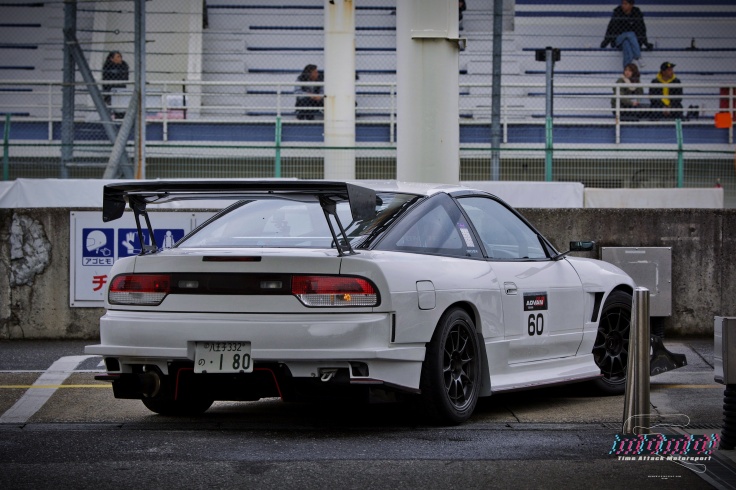 S-Chassis’ are always a nice sight at time attack events; unfortunately this one didn’t do too well for the day finishing third to last on the time sheets. 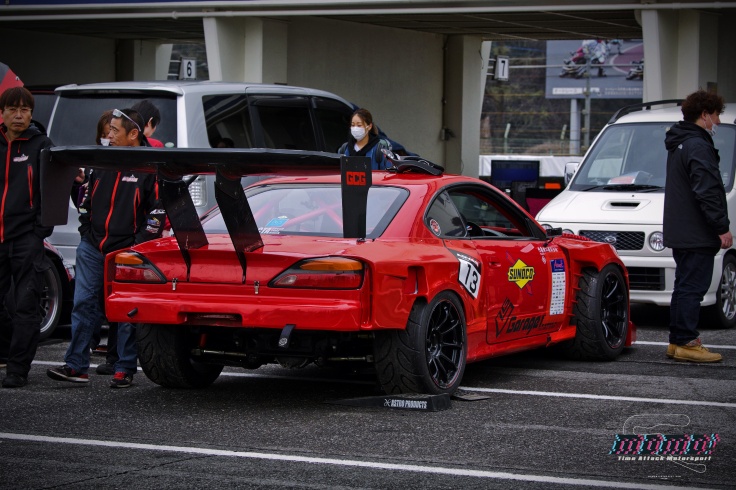 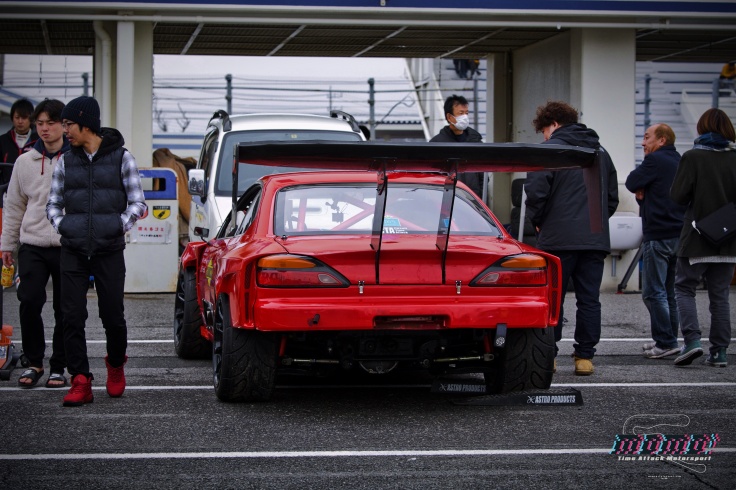 On the other hand, the Garage Mak S15 did much better with a fastest lap of 59.229 for the day, which is still about two seconds slower than its best. 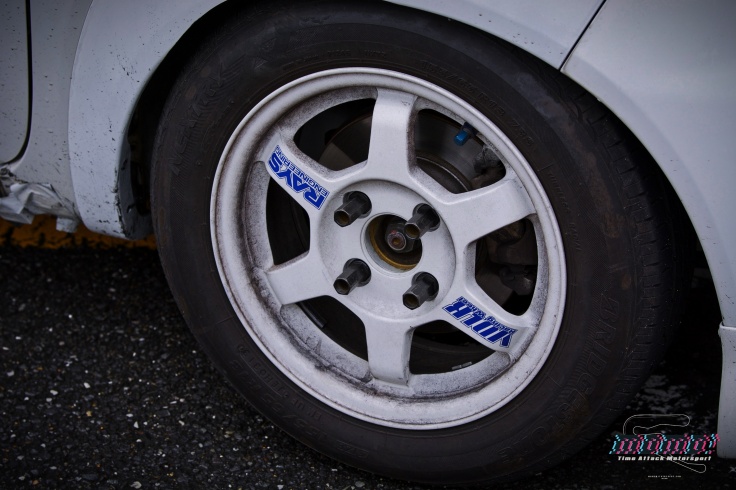 This Suzuki Twin on 13 inch TE37s was my girlfriend’s favorite car in the whole event… I guess she thinks it’s cute, which it really was. But the best part of this car was how serious it looked; it even had a spare TE in the passenger seat. Makes me wonder what kind of lap times this thing can lay down… 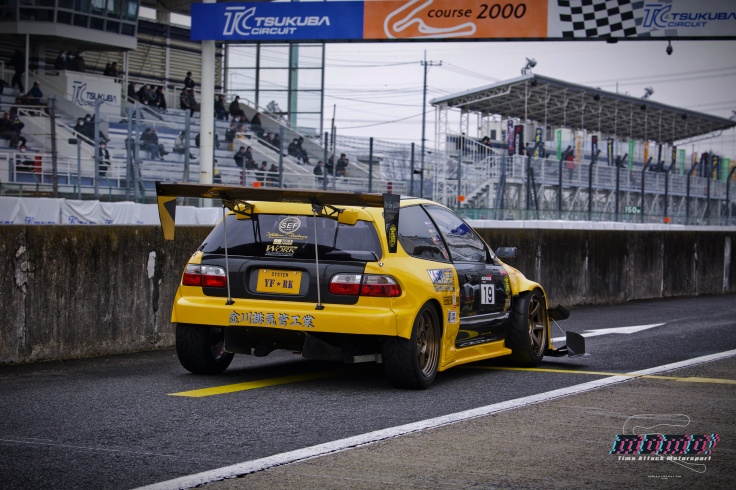 The Yellow Factory EG6 took over as the fastest NA FF Honda recently but it wasn’t able to improve on its time during Attack Tsukuba.

The old NA FF champ. I think I’ll have more photos of the Aslan EG in a later post. 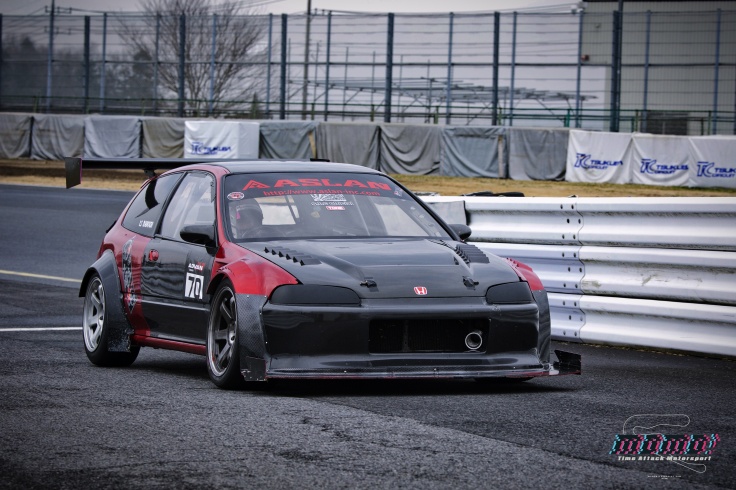 Another EG6 was also representing Aslan, this one competed in Radial Class. 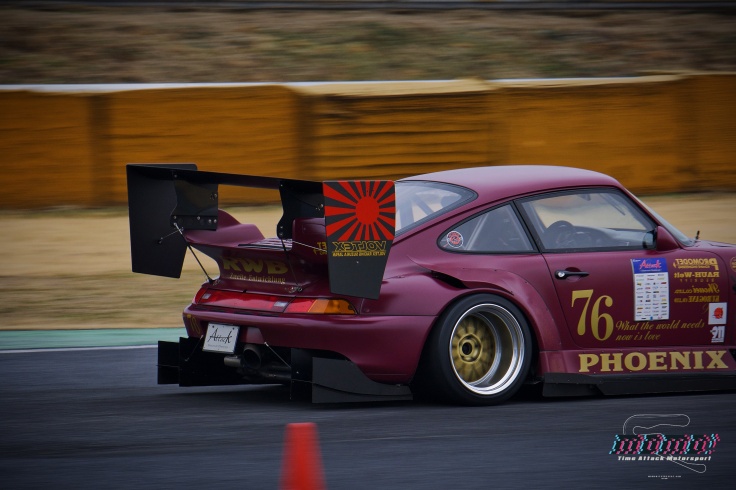 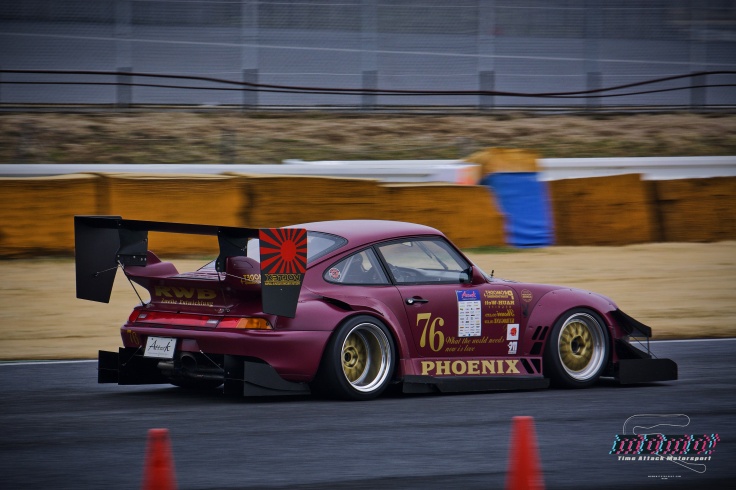 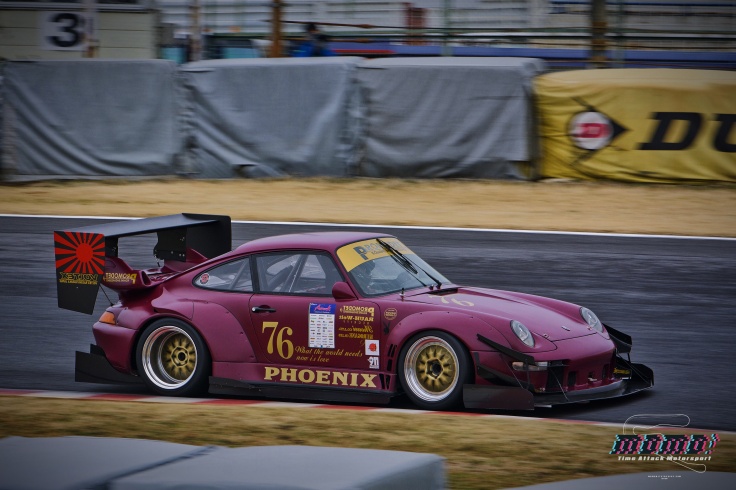 Porsches have been pretty prominent in the Attack series these past several years but none more so than the Promodet RWB Phoenix. The burgundy 993 wide body is making upwards of 650HPs from its 3.8L power plant and have literally unlimited amount of grip thanks to 275/335 Hoosier rubbers.

The TS Factory/HCR Yamamoto AE86 finished the event with a 58.768, about a half second off its best ever lap time.

Another RWB Porsche at the event was this 964RS; a subtler car compared to the Promodet beauty.

Fresh off the boat from WTAC was the unmistakable Autobahn Joyosan Soarer. The 1000+HP capable monster of a car was not able to hit its target time for the event (like many others), but still came in second overall for the day with a best time of 53.886. Also, I just wanna point out that I LOVE this new livery compared to the old rendition.

I was hanging out near the Dunlop circle area for a good portion of the day since that was a pretty good spot to take photos and video (I have the video embedded at the end of this post!). One of the cars that I caught in action while I was posted there was the Total Car Service Usui NA Miata. The bright blue wide body Miata was absolutely stunning on track, and unfortunately puts many Miatas I’ve seen to shame… at least aesthetics wise. 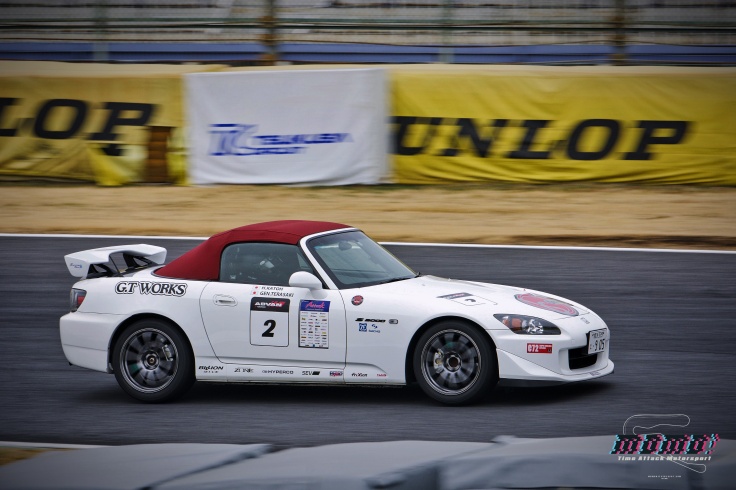 Sadly, ASM has retired its time attack car for the time being and has been putting their focus on its street demo AP2. Surely, the AP2 is still a great S2000, but I do miss seeing their #1 car out at Attack. I’m crossing my fingers that they’ll somehow bring their wide body out in some future events…

So that’s about it for this part of the coverage, be sure to check back when I have the rest of the coverage on the next post! Oh, and remember to check out my Tsukuba Attack 2020 “highlights” video below… see ya next time!